Designed to give you an insight to all the latest news, interviews & goings on in the world of UK American Football. Interact with other readers by using the Facebook comment section at the bottom of each article & share them with your friends & family via Twitter, Google, Facebook & more.

They may be Giants…But they’re still growing

The UK Dukes are Flying the Flag!

Chris Stone is a native of Lebanon, Ohio. He’s been on his Football Journey for twenty-one years, and as of now, it doesn’t look like ending anytime soon. He’s currently Head Coach for the QMBL Vipers in the BUCS leagues and an assistant coach for the BAFA British Champion London Warriors. In his playing career however, he has had four “final games” much to his mom’s delight and anguish. Chris gave me some background around how he came to play Football.

“Sports has always been a staple of my life. I was raised in a sports family. My father played Double A professional baseball and I spent more time on a ball diamond than I did anywhere else growing up. I played everything, soccer admittedly had been my first sport, basketball my first love, and baseball was genetic, but I first began playing football when I was 8 and now it’s basically my life. I had a very successful high school career, but I wasn’t a D1 type of physical specimen. I had the opportunity to play at some smaller schools, but at that time thought I was ready to just be a student so my freshman year I attended Miami University. However, halfway through the year I missed football too much and transferred to Wittenberg the next year. Admittedly my time at Wittenberg didn’t provide the experience I was looking for. I was a part of some really successful teams, but the overall experience left me burnt out and quite honestly uninterested in football altogether. While I was at Wittenberg, I made the controversial decision to study abroad in the off season and spent 6 months at Queen Mary. That 6 months changed my whole life and is the one point in my life you can point at that changed everything”. 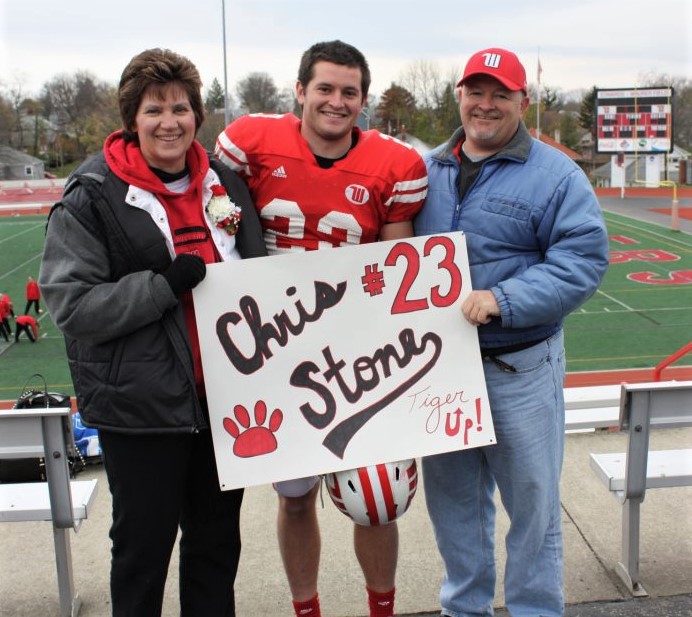 Chris and his Mum and Dad at a Wittenberg game

Having enjoyed his time in the UK he decided to study for a master’s here. He had no intention of playing Football again, but after a little encouragement… ”That experience is what led me to do my master’s at Trent. When I came over, I had no idea at all there was an American Football team. I didn’t even know if there was a gym at the uni. I was solely interested in studying and never even considered it. Then a few weeks before leaving I tweeted at Trent’s account asking if they knew anyone with a baseball glove who could throw with me. The next morning, I woke up with a tweet from my then future best man Marcus Boswell telling me there wasn’t a baseball team, but there was an American Football team. My first reaction was a hard no. I still had a lot of negative feelings towards the game at that point, but Marcus was persistent. I offered to be a part time coach and if you know Marcus, you’ll know he doesn’t take no for an answer. Ultimately, he got me to give it a try. I have to thank him for it because it’s one of the best decisions I ever made. The whole experience reignited my love for the game and showed me a whole new side of it coming from a UK perspective. During his time at Trent, Ohio’s number one Football Mom (Kim Wolbers Stone) decided to fly over to see her son play “one more time”, that’s dedication for you! 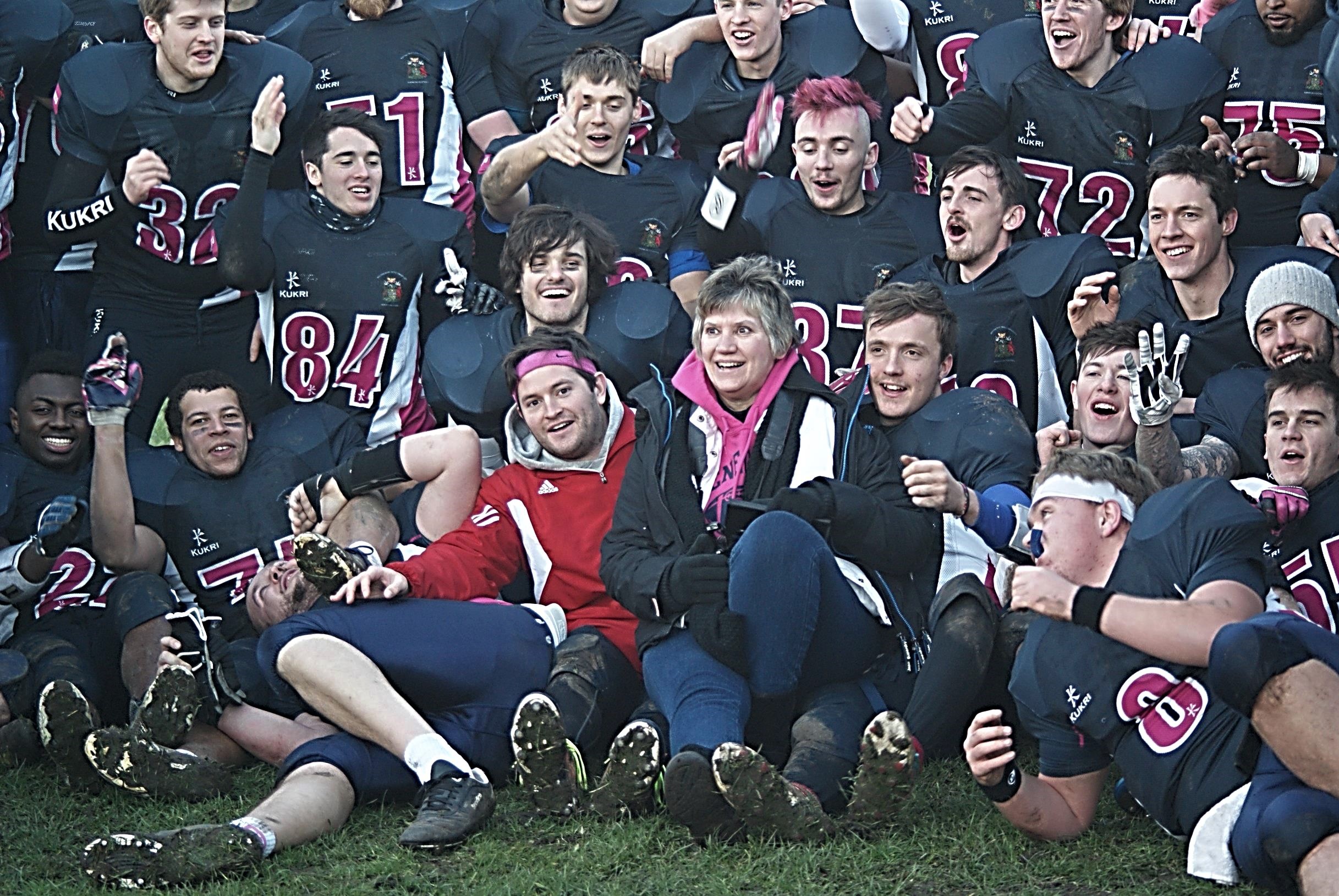 Kim celebrates with the Trent Renegades

After Trent there were some visa issues and I ended up back at home where I coached at Springboro for a year. I always knew I wanted to coach. I originally studied to be a teacher and then coach, but after Witt that dream was killed. However, Trent brought it back and it was good to coach alongside a number of coaches at Springboro who coached me when I was a kid. After a long time at home I finally managed to get back to my wife and the UK.

Would Chris be settling down to a comfortable Football free life? No, he wouldn’t! I’ll let him pick up the story. “In a way that can only be described as destiny I saw that Queen Mary now had an American Football team. I emailed them saying hey I’m moving to London I’m happy to be a position coach. Ross Clarkson who founded the club and is still a vital part of the program got back to me saying they needed a head coach. Initially I wasn’t sure if I wanted that much responsibility, but ultimately decided this was a great opportunity to help lead something. At the time QM had just finished their first season so they were really in their infancy. I really thought I could most importantly help with the culture. I really believe in the power of Football and the family it creates. Then considering all that Football gave to me I wanted to make sure I could be a part of something where a new generation could experience the game and hopefully feel the same way I did about it. Ultimately, I got brought on as the head coach and in my first season won our conference and got promoted. We followed that up in our first year in D1 with a playoff berth and we’re now looking forward to this season.

So, with Chris established as a Head Coach, was his playing career over? Mmm…not quite. He was soon to make another stop on his journey.

“Along the way I met Sam Obi, who coaches my DB’s at QM. I had been hit up by a number of London adult teams about coaching, but none of them really had the mentality I was looking for. Sam being a UK Legend and Britbowl MVP for the Warriors I asked him about the program. He introduced me to Marvin Allen, and I was really impressed with how they were run. My first year I helped coach the DB’s and after the National Championship the guys got to talking to my wife, being like, oh let him play next year. A few days later she’s like why don’t you play again? I was pretty hesitant, but this time more that I was 4 years removed from playing, out of shape, and had a full-time job. But like Marcus she kept pushing and pushing, so finally I said alright I’m joining the gym and buying a bike to cycle to work, if I get to February and I feel like I’m back in a place to compete I’ll do it. My parents weren’t thrilled about it, but they understood. Long story short I came back and played. I wasn’t near the player I was, having to be more reliant on my knowledge of the game. Really the team had a number of great players and I was there to make plays when they needed me. I’m glad I played, I got to go out on a high with another Championship, but ultimately it was a reminder that my time has come. So now it’s all focusing on giving back to the next generation and hopefully being an influence that grows the game in the UK. 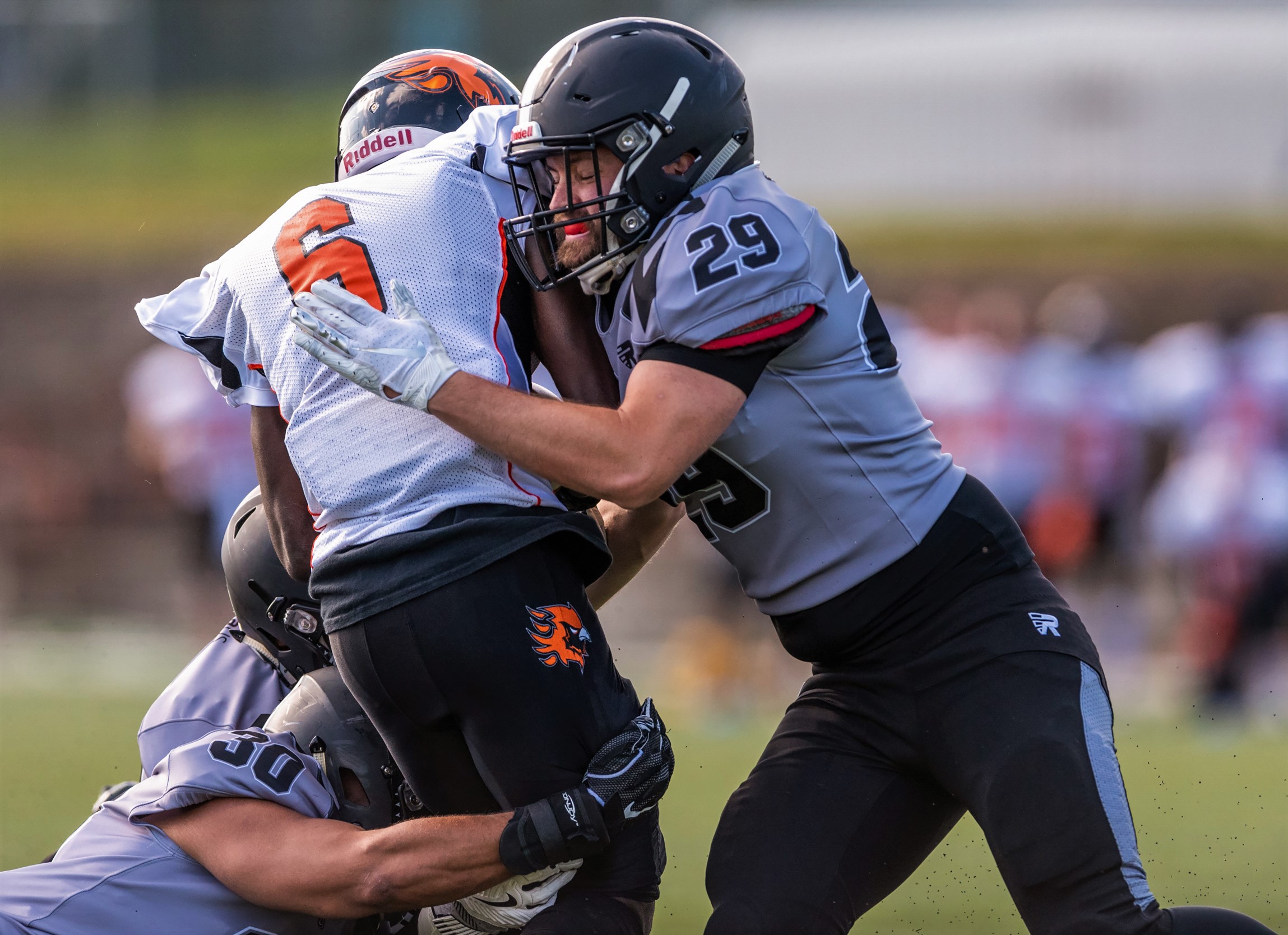 Chris delivers a hit in the Britbowl

You’ll see from his story that Chris has Football in his DNA. We’ve been lucky here in the UK to see the best of him first as a player and now as a coach. Thankfully for us his journey continues, he certainly has plans to contribute a whole lot more.

Do not show this popup again.